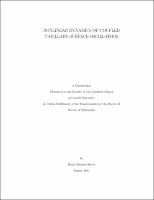 The nonlinear dynamics of coupled liquid droplets and bridges are examined. By restricting droplet and bridge shapes to equilibrium states, the quasi-static dynamics of such systems may be studied using ordinary differential equations, and the techniques of nonlinear dynamics may be applied. For example, liquid droplets are restricted to spherical-caps, whose shapes may be deduced solely from their volume. Networks of liquid droplets are first considered. Static solutions are grouped into families, each with some p droplets large and some q = n [-] p small. The twodroplet system is modeled as a conservative second-order oscillator and fixed points undergo a pitchfork bifurcation as the total volume is increased; furthermore, when subjected to periodic forcing, chaotic dynamics are possible. Bounds for chaotic dynamics are investigated by using Melnikov's method and calculating Lyapunov exponents. Results are compared qualitatively with experimental results, thereby confirming the existence of chaotic motions. The two-droplet model is then extended to a n-droplet frictionless Sn symmetric model that consists of n [-] 1 second-order differential equations. Symmetry of the system is fundamental. In particular, independent of the equations, fixedpoints may be grouped into families by the number of small and large droplets. Within the families, stability is invariant and hence significantly reduces the number of equilibria to be considered. All equilibria, and their associated stability, are calculated analytically for an arbitrary number of droplets. For three droplets, the system is fourth order and thus trajectories are (in general) quasi-periodic or chaotic. Because the equations are S3 symmetric, trajectories may also possess S3 , or one of the three flip symmetries. Since there is no dissipation there are no asymptotically stable attractors. As such, trajectories of interest are away from equilibrium. In particular, trajectories with no initial velocity are analyzed to ascertain their symmetry as well as their dynamic nature. Both these determinations may be done in an automated fashion through the use of symmetry detectives and Lyapunov exponents, respectively. For this system, the results of these two methods reflect a strong correlation between symmetry and nonlinear dynamics; chaotic trajectories are S3 symmetric while quasi-periodic trajectories possess one of the three flip symmetries. Next, a non-smooth switching bridge-droplet system is considered. The system has two states: droplet-droplet and bridge-droplet. The switching system can be obtained from the two droplet system by introducing a planar substrate below one of the droplets. As the system oscillates, it may transition between states if the droplet impacts the wall or the liquid bridge breaks. The two transitions occur at different places in state space which results in a region for which the system is multiply defined. In addition, transitions are assumed to be instantaneous with no loss of velocity. The two states are first analyzed separately. The bridgedroplet state undergoes a cusp bifurcation in a two parameter expansion. Boundary equilibrium bifurcations also occur when an equilibrium point collides with a nonsmooth boundary. If the bridge-droplet and droplet-droplet states are combined, a two parameter bifurcation diagram for the switching system is realized. Switching trajectories are of particular interest because each switching cycle dampens the system until it no longer switches. These trajectories are mapped into a semi- infinite cylindrical space in which long-term behavior can be described solely by the dynamics in the multiply defined region. In the final chapter models for pull-off adhesive failure are considered. Recognizing engineering applications (i.e. a capillary adhesion device) as well as a phenomenon found in nature (i.e. defense mechanism of palm beetle), models for pull-off adhesive failure are developed for different loading conditions and compared with available observations. In particular, array geometry and the relationship of adhesive failure to the instabilities of a single liquid bridge are emphasized.