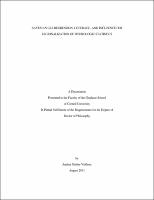 The research presented in this dissertation develops new statistical techniques for estimating regional relationships of hydrologic statistics. These techniques include extensions of the quasi-analytic Bayesian Generalizes Least Squares (B-GLS) framework presented in Reis et al. [2005] and further developed by Gruber et al. [2007] and Gruber and Stedinger [2008]. Recent extensions include a Pseudo R2 and pseudo analysis of variance table, plus a range of model performance, diagnostic and goodness-of-fit statistic. This dissertation develops a more stable Bayesian WLS/GLS procedure with the corresponding measures of precision and model performance. Special attention is given to model performance criteria, and the meaning of and insight provided by alternative measures of leverage and influence. Examples address development of regional skewness coefficients to improve flood frequency analysis in the United States. Large cross-correlations between annual peak discharges, coupled with relatively small model error variances, present difficulties in regional GLS skewness analyses. The B-GLS framework seeks to exploit the cross-correlations among the sample skewness estimates to obtain the best possible estimates of the model parameters. However, if the cross-correlations are large, the GLS estimators can become relatively complicated as a result of the effort to find the most efficient estimator of the parameters. Unfortunately, it appears that the precision of the cross-correlation estimates between any two particular sites is not of sufficient precision to justify the seemingly incorrect weights (both positive and negative) that the B-GLS analysis generates. Thus, an alternate regression procedure using both Weighted Least Squares (WLS) and GLS is developed so that the regional skewness analysis can provide both stable and defensible results. This alternate regression framework, is applied to two different data sets from different parts of the United States: the State of California and the Southeastern United States, to develop regional skewness estimators for flood frequency analysis. In addition, special attention is devoted to comparing and developing leverage and influence diagnostics statistics for GLS and WLS/GLS analyses, which can be used to identify rogue observations and to effectively address lack-of-fit when estimating hydrologic statistics.