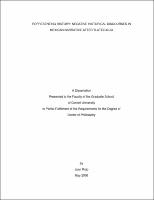 On October 2,1968, preceding the Summer Olympic Games in Mexico City, a peaceful protest was held at the Plaza de las tres culturas in Tlatelolco which ended with the violent intervention of the Mexican Army. Following the massacre, the state controlled media downplayed the magnitude of the events and instead focused on the upcoming Olympic Games. Thirty-five years after the fact, much of the information regarding the massacre remains classified and the government refuses to admit responsibility for the deaths. This project examines the literary representations of that history with a particular focus on the creation and manipulation of negative narrative spaces after 1968. Given the absence of a historical representation of Tlatelolco in the PRI constructed national discourse and the dominance of that discourse, the literary works studied in this project aim to represent history in a narrative space inaccessible to it. In the first chapter I examine Luis Gonzalez de Alba's testimonial Los Dias y los a?os (1971). This work acts as a meta-history of the current articulation of nation as it bears witness to the mechanisms which were responsible for the unarticulation of Tlatelolco we see today. Chapter 2 looks at Armando Ramirez's Chin chin el teporocho (1972). The novel draws attention to a textual hole in the narrative which mirrors a historical void in the discourse of the nation. It takes a stance against that omission by unequivocally making a silent statement against it. It actively unspeaks an institution which has silenced the student movement. The third chapter examines Jose Emilio Pacheco's Las batallas en el desierto. This novel deconstructs the historical apparatus of the nation and introduces a series of alternative historical models. The final chapter looks at the films Rojo Amanecer and El Bulto. Both films are a testament to the absence of the history of 1968. Rojo Amanecer is the first film to be released concerning Tlatelolco and it examines the processes by which the massacre occurred and why it has remained silenced for over twenty years. El Bulto raises the question of how to reincorporate that absent history should it become known.