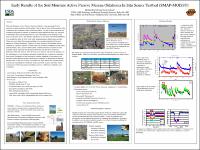 The Soil Moisture Active Passive Mission (SMAP) is an upcoming NASA mission to monitor surface soil moisture. Key to the success of this mission is the calibration and validation of the resulting product. As part of the calibration and validation program for SMAP, an ambitious intercomparison study was initiated to determine how soil moisture sensors vary with respect to measuring a long term in situ time series. The Marena Oklahoma In Situ Sensor Testbed (MOISST) was installed in May of 2010, with other instrumentation added more recently. There are more than 200 sensors installed over an approximately 64 hectare pasture in Central Oklahoma. There are 4 main stations with multiple sensors installed in a profile. Sensors located at the site include a COSMOS system, GPS reflectometers, and a passive DTS system. Additional sensor systems are also installed which represent the Oklahoma Mesonet and the NOAA Climate Reference Network stations. This diverse set of sensors will provide guidance on the aggregation of soil moisture networks worldwide into a single soil moisture data record. In support of the time series, regular sampling of gravimetric soil moisture and vegetation water content were conducted to determine an absolute ground truth. A full year of data is available for study which has yielded several conclusions regarding how different sensors perform in space and time. Early conclusions will be presented, including accuracy, calibration, reliability, and scalability.