G1. Can Stream Baseflow be Augmented Through Stormwater Infiltration? The Case of Minnehaha Creek Watershed 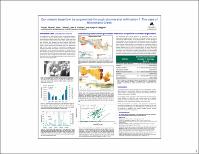 Coursing nearly 21 miles from its origin at Lake Minnetonka to its confluence with the Mississippi River, Minnehaha Creek is among the most valued surface water features of the Twin Cities area and attracts roughly half a million visitors annually. Flow in Minnehaha Creek is heavily dependent on discharge from Lake Minnetonka, the outlet of which is controlled to manage water elevations in the lake. The recent streamflow record indicates that groundwater-fed baseflow is not consistently sufficient to sustain flow in Minnehaha Creek during periods when Lake Minnetonka’s outlet is closed, as the creek has experience dry periods in 8 of the last 12 years. Expedient stormwater drainage networks throughout the creek’s urbanized watershed exacerbate extremes in flow conditions and contribute to the creek’s impaired status for biotic integrity. Local interest in enhancing ecosystem service provision by Minnehaha Creek is driving stormwater management decisions in the watershed. We have posed the hypothesis that baseflow in Minnehaha Creek can be augmented through strategic infiltration and storage of stormwater runoff in the shallow aquifer system. As an initial step in understanding surface/ shallow groundwater interactions and current low-flow conditions in Minnehaha Creek, several methods have been investigated to estimate groundwater recharge within the watershed, water balance calculations have been conducted, and the method of Brutsaert and Nieber (1977) has been applied to streamflow data to infer physical characteristics of the shallow aquifer. Combined with surficial geologic datasets, initial results indicate that sustained baseflow during drought periods in Minnehaha Creek is likely limited by rapid vertical transit of groundwater through the shallow aquifer to underlying bedrock units, the median travel time of which is on the order of 0.5 years. As such, it is likely that only a small portion of the shallow aquifer (< 1%) contributes baseflow to the creek. Field measurements of stream and porewater temperatures, groundwater seepage, and O-18 and deuterium isotopes will be used to provide further insight to the Minnehaha Creek aquifer system and the potential to augment flow during drought periods through stormwater management.