B6. Suitability of Using Groundwater Temperature and Geology to Predict Arsenic Contamination in Drinking Water – A Case Study in Central Mexico 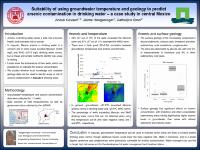 Arsenic in drinking water poses a risk to people’s health and can cause skin disorders, irritation of the respiratory and digestive systems and increased risk of cancer. In parts of Irapuato, central Mexico, arsenic levels in groundwater used for drinking water exceed Mexican and World Health Organization drinking level norms, but a cheap and simple method to identify areas at risk of exceeding these norms is lacking. Since previous research suggests a relationship between water temperature and arsenic concentration, and geology may also play a role in elevated levels of arsenic, water managers can possibly use local knowledge on well temperatures with available geological data to identify high-risk areas. To evaluate the suitability of such an approach, data was collected for 111 wells, using well samples collected in the field and government data collected by JAPAMI. Results show that water in 24% of the sampled wells exceeded the Mexican norm of 0.025 mg/l arsenic, while a disturbing 51% exceeded the stricter WHO norm of 0.010 mg/l. There was a fairly good (R2=0.54) positive linear correlation between temperature and arsenic concentration. On average, groundwater >27.4°C exceeded the Mexican arsenic norm, and >25.9°C exceeded the WHO norm, with false negative rates of 7 and 20%, respectively (i.e. cooler water exceeding arsenic norms). Surface geology in Irapuato is dominated by alluvial sediments, volcanic rock, limestone, sandstone and conglomerate. Results show that surface geology has a significant effect on arsenic concentrations, with limestone, and to a lesser degree sandstone and conglomerate, having significantly higher arsenic levels than alluvial sediment and volcanic rock areas. However, the sampled wells were predominately located in alluvial sediment areas, with only 2% of measurements in limestone and 9% in sandstone and conglomerate areas. This research shows that in Irapuato, groundwater temperature can be used to evaluate which areas are likely to exceed arsenic drinking water norms, though additional factors could lower the false negative rate. Wells in consolidated sedimentary rock, particularly limestone, were particularly vulnerable for arsenic contamination. Water managers can use this information to target high-risk areas and for the development of water management and treatment plans.