An Evaluation of the Sensitivity of U.S. Economic Sectors to Weather 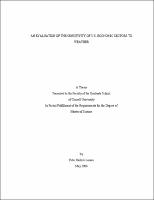 This study quantifies the impact of weather on eleven two-digit SIC sectors of the U.S. economy ranging from agriculture and construction to retail trade and utilities. Although it is obvious that weather affects the output of most sectors in some way, the magnitudes of these effects are not well known. This research effort estimates the historical sensitivity of production to annual weather variability. In addition to defining what it means for a sector to be sensitive to weather relative to another sector, industry productivity from 1977-2000 was modeled against measures of temperature and precipitation along with more traditional inputs to production like capital, labor and energy consumption. Specifically, sector output is modeled using a transcendental logarithmic production function (TRANSLOG) with measures of regional weather included. In order to estimate the aggregate sensitivity of the U.S. economy to weather, Monte-Carlo simulation of the four measures of weather is employed for each region by randomly drawing from historically observed weather combinations (i.e. temperature and precipitation) to produce distributions of sector-region output variability holding the conventional economic inputs constant. As expected, the results show that the impact of weather varies from region to region and sector to sector. It is also evident that traditional methods used to model economic production such as the Cobb-Douglas and TRANSLOG specifications are improved statistically with the inclusion of measures of weather as factors of production. Given the available data at the annual level, the econometric results show that in general and across regions, the manufacturing sector is more sensitive to weather (e.g. cooling degree-days) than previously thought. The results also indicate that economic sectors in the Western U.S. are more sensitive to weather than they are in the Midwest and East Coast. It is also reported that as the standard deviation of precipitation changes by 1%, average U.S. transportation and utilities sector output drops between .02% and .09% (respectively). For context, actual year 2000 output for the utilities sector was over $200 billion and actual transportation output exceeded $300 billion at the national level. Similar data is reported for nine additional sectors and four measures of weather across eight regions of the country. Although small with respect to traditional factors of production, it is shown that U.S. GDP has expanded on average by $20.8 billion ($2004 U.S.) annually with measured, historical weather variability. In contrast to the subjective estimates made by Dutton (2003) indicating that ?one-third of private industry activities are sensitive to weather?, this research finds that only 16.2% of the aggregate U.S. economy is sensitive to weather on an annual basis. Nevertheless, the effects of weather variability on specific sectors, particularly in Western states, is substantial.

This thesis is based upon a series of statistical programs written in SAS. The programs can be used to evaluate the economic impacts of future and historical climate/weather regimes for the contiguous United States. Individuals (or corporations) interested in the specifics of these programs should contact the author directly.