B4. Capillary Effects on Groundwater Waves in Unconfined Coastal Aquifers 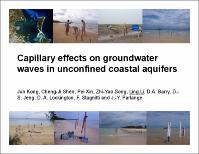 Various types of Boussinesq model exist, including those that account for finite-depth aquifers and capillary effects. Such models are used to simulate propagation of groundwater waves (watertable fluctuations) due to, for example, tides. However, discrepancies remain between experimental data and theoretical results. We proposed a Boussinesq-type model that (i) accounts for combined saturated-unsaturated zone flow and (ii) considers both horizontal and vertical flow. The unsaturated zone flow was modeled using Gardner’s hydraulic functions. The model, first solved numerically, provided predictions that improved agreement with experimental data on the propagation of tidal signals in a coastal aquifer. An approximate analytical solution to the model was also derived. The analytical approximation shows that the unsaturated zone’s storage capacity permits watertable fluctuations to propagate more readily than predicted by previous models. This occurs because the exchange of water with the capillary fringe is minimal during the passage of groundwater table fluctuations. The propagation characteristics of the groundwater waves predicted by the new analytical solution were examined in detail with respect to amplitude damping, phase shift and over-height of the fluctuating watertable.

Once downloaded, these high definition QuickTime videos may be played using a computer video player with H.264 codec, 1280x720 pixels, millions of colors, AAC audio at 44100Hz and 29.97 frames per second. The data rate is 5Mbps. File sizes are on the order of 600-900 MB. (Other formats may be added later.) Free QuickTime players for Macintosh and Window computers may be located using a Google search on QuickTime. The DVD was produced by J. Robert Cooke.