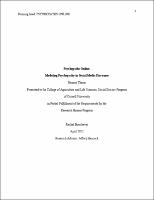 This is an exploratory study examining the relationship between discourse patterns in social media and undergraduate students’ levels of psychopathy when compared to discourse patterns in narratives produced in a laboratory. It expands on previous research findings that psychopathic murderers exhibit narcissistic tendencies and psychological distancing in their discourse when compared to non-psychopathic murderers. Undergraduate students’ emails, SMS messages, and Facebook messages were collected and analyzed in relation to their scores on the Self-Report Psychopathy Test III (SRP III). Findings support both main hypotheses: that discourse patterns in social media are distinctly different from discourse patterns in narratives produced in a laboratory, and that psychopathic tendencies are identifiable in social media discourse. Consistent with previous studies, students higher in psychopathy showed evidence of psychological distancing, produced less comprehensible language, potentially reflecting their low reading achievement levels, and produced more anger and swear words, consistent with the emotional deficits and disagreeableness central to psychopathy.