What Is Simple Is Usable: Is Beauty Truly A Predictor Of Percieved Usability? 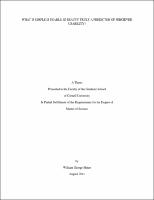 ABSRACT For more than a decade, the correlation between beauty and perceived usability has been a popular topic of focus in both Human Computer Interaction (HCI) and Human Factors (HF) circles. As opposed to previous research that has mainly looked at how attractive designs can increase usability (Tractinsky, 2000), this thesis explores the directionality of the correlation between beauty and perceived usability. Specifically, to what extent does attractiveness increase and unattractiveness decrease perceived usability? It was hypothesized that a bad design would have more of an impact on perceived usability than a good one. Thus, based on the phenomenon of "negativity bias" (Baumeister et al., 2001; Rozin &amp; Royzman, 2001; Griffin &amp; Langlois, 2006), an experiment was designed to test if an "ugly" design had more of an effect on usability, in the negative direction, than a "beautiful" design had in the positive direction. Additionally, it was hypothesized that this perception of usability may change over time. Similar to the methods used by Tractinky (2000) and Soderegger &amp; Sauer (2010), measures were taken before and after using a blogging website. A preliminary study (N=48) was conducted to determine which of the 12 researcher generated layouts were the most beautiful, ugly, and aesthetically neutral. The 3 layouts that were selected - "beautiful", "ugly", and "neutral" - were then applied to three different blogs that had identical structure, content, and usability. In a second, separate "main study" experiment, participants (N=69) were first presented with a static image of their assigned blog/beauty level. They then completed an abbreviated version of the System Usability Scale (SUS) and the Standardized Universal Percentile Rank Questionnaire (SUPR-Q). Next, the users were allowed five minutes to "surf" the website before they completed a second SUS and SUPR-Q. Overall, the main study experiment was a between subjects 3 x 2 factorial design with the independent variable of aesthetic level (beautiful, ugly, neutral) crossed with the independent variable of time (pre-use and post-use). The dependent variable was usability, as recorded by a System Usability Scale (SUS) and Standardized Universal Percentile Rank Questionnaire (SUPR-Q). The results of the experiment did not support Tractinsky's (2000) findings that the more beautiful a design is, the higher it's perceived usability will be. Rather, the "neutral" blog received significantly higher (p<.05) ratings of perceived usability that both the beautiful and ugly designs - which had significantly similar (p>.05) rated usability. In agreement with Tractinsky (2000) however, there was a significant increase in rating between pre and post use of the blogs. Overall, these results suggest that beauty may not intrinsically influence perceived usability. In fact, it may be that simplicity - as seen in design of the "neutral" blog - is the true influencer of perceived usability and "beautiful" designs are merely predisposed to be more "simple" than ugly ones. Because of these and other novel results, further research is needed to tease out the true effect of beauty and simplicity on usability.