Annals Of A Former World: The Remnants Of Water At Gusev Crater And Eberswalde Crater, Mars 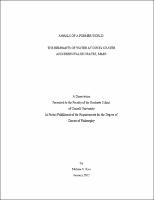 Understanding the past and present distribution, form, and behavior of water on Mars is critical to assessing whether the planet is, or was ever, a habitable world. This thesis examines the evidence for a more water-rich past that is preserved at two key locations on Mars: (1) Gusev crater, the landing site of the Mars Exploration Rover (MER) Spirit; and (2) Eberswalde crater, a candidate landing site for the Mars Science Laboratory (MSL) Curiosity. At Gusev Crater, the discovery of hydrated silica- and sulfate-rich soils in the Columbia Hills was one of most significant results of the MER Spirit mission. In visible to near infrared (Vis-NIR) spectra from the Pancam instrument, an H2O and/or OH absorption feature near 1000 nm is characteristic of the silica-rich materials. This spectral feature has been used to developed a ''hydration signature" for mapping the distribution of hydrated materials at Gusev crater. An extensive study of the Vis-NIR spectra of natural and synthetic silica-rich materials has been performed to help interpret observations of silica on Mars. Temporal observations of the silica- and sulfate-rich soil spectra reveal that no statistically significant spectral changes occurred, implying that the minerals have not undergone dehydration after their exposure. Eberswalde Crater is famous for the spectacularly preserved delta near its western wall, which indicates an aqueous sedimentary environment. Five additional fluvio-deltaic systems in the crater are identified and described in this work. The identification and mapping of a fault system in and around the crater has revealed the topography as being largely controlled by dip-slip faulting. A detailed geologic characterization of the entire Eberswalde crater basin has also been performed, and maps of stratigraphic and geomorphic units have been produced. The results reveal a complex relationship between deposition and exhumation within Eberswalde crater, and a more complex history of aqueous activity than had previously been acknowledged.