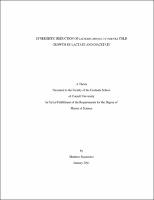 Listeria monocytogenes is a psychrotolerant foodborne pathogen that is of particular concern to the ready-to-eat meat and seafood industries because it‟s ability to grow at low temperatures reduces the ability of refrigeration to control the pathogen‟s growth in foods. Because L. monocytogenes generally contaminates foods at low levels and has a high infectious dose, the ability for the organism to grow in foods is critical for its ability to cause disease. One method to control L. monocytogenes' growth, widely used in the ready-to-eat meat industry, is to formulate products with combinations of the organic acids lactate and diacetate, as they appear to have synergistic (greater than additive) effects. The purpose of this work was to demonstrate synergistic growth inhibition by lactate and diacetate in a statistically rigorous manner. The approach was to grow strains of L. monocytogenes representing the two major genetic lineages in broth treated with lactate, diacetate or the combination of both at the same level at refrigeration temperature. The data show the growth inhibitor combination extends lag phase and decreases maximum growth rate similarly across both genetic lineages, and in a statistically significant manner (a significant interaction between treatments), quantitatively proving synergism. Monte Carlo simulations provided further evidence for synergy by predicting significantly slower growth to nominal endpoints, such as a 1-log increase, for the combination of inhibitors. This study quantitatively confirms the qualitative evidence in the literature for lactate and diacetate synergy and justifies the combined use in food product formulations. The final chapter describes two directions to continue this research, specifically (i) using these synergy calculations methods to characterize and optimize novel growth inhibiting treatment combinations and (ii) using molecular genetics techniques to investigate the mechanisms behind the synergistic actions of lactate and diacetate.