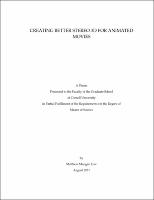 Current methods of determining stereoscopic parameters for stereo 3D films away important information about the relationship between the geometry or scene elements, the camera, and the viewer, reducing the problem to a 2-dimensional space of camera separation and convergence distance. This ion handicaps the film's artists by narrowing the scope of the stereo aspects of movie making to being a post process, equivalent to applying a 3D lens to a movie already designed to be flat. In an attempt to counter the effect of this abstraction and to better incorporate a stereo mindset into other components of filmmaking, we have developed an interactive visualization and intuitive pipeline toolset for animation artists that allows them to simultaneously view and manipulate the impact of the higher-dimensional parameters normally abstracted away in common stereo techniques. By visualizing the complete, comprehensive stereo pathway and encouraging meaningful interaction with it, artists are better enabled to create fully informed creative and artistic stereo decisions earlier in the preliminary design stages, foresee issues related to inherent or unintentional distortions that may arise further down the production pipeline forcing costly re-renders and re-animations. By providing a quicker comprehension of the stereo space and a better understanding of the terminology used, we hope to show how the study of depth perception can guide the creation of better stereo 3D content. The toolset also provides for the definition of a metric of stereo distortion as it relates to the perception of volume and shape, which allows artists to make informed judgments on what constitutes perceptually good stereo, either through automated optimization or constrained manipulation based on the limits of human perception. This tool and its applications were tested in the production animation pipeline at DreamWorks Animation, and provided sufficiently accurate and helpful feedback and aesthetically pleasing suggestions to artists involved in the production of stereoscopic 3D animation.