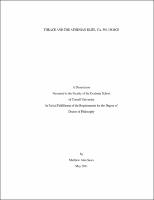 This dissertation examines the personal ties between elite Athenians and Thrace from the mid sixth century to the mid fourth century BCE in four case studies - the Philaids and the Thracian Chersonese, Dieitrephes and the massacre at Mycalessus, the northern campaigns of Alcibiades and Thrasybulus, and the fourth century mercenary general Iphicrates. In order to highlight further the particular qualities of those elites who were drawn to Thrace, the final chapter examines figures that shared several traits with Athenian Thracophiles but did not make extensive use of Thracian ties. The relationship between Athens and Thrace is explored in terms of three broad categories - political, military, and cultural. Given that there continued to be ambitious elites in Athens even after Solon‟s reforms and the subsequent climate of increasing political equality between male citizens, Thrace served as a political safety valve. Thrace was a place to which elites could remove themselves should they be unwilling or unable to engage in the prevailing ideological system and should mechanisms like ostracism fail to achieve the desired result, such as the removal of their more powerful competition. Experience with Thracians was often the catalyst for military innovation. Several Athenians were pioneers in adopting Thracian methods of warfare. Thrace was a forum for experimentation as it was a long way from the pitched hoplite battles that were the norm between mainland Greek poleis, and Thracophiles were frequently the sorts of leaders that were unconstrained by the hoplite ethos. Finally, some elements of Thracian culture and society were powerfully attractive for ambitious Athenians. In the Athenian imagination Thrace was a throwback to the primitive societies of the Greeks‟ own past, specifically the world of epic. For the Athenians, Thracian culture and society were defined by aselgeia (licentiousness) and poluteleia (extravagance). While these traits were disdained by many, they proved enticing to others, those whom Aristophanes would dub Thraikophoitai, or Thrace-haunters.