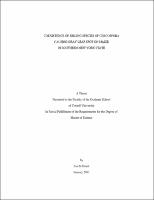 Two Cercospora sibling species, C. zeae-maydis (Czm) and C. zeina (Cz), are recognized as the causal agents of gray leaf spot (GLS) of maize (Zea mays). A report from 1998 indicated the presence of the two species in South New York State. An intensive survey was conducted in central and southern New York State in the maize growing season in 2006. A total of 689 Cercospora isolates were obtained from 108 leaf lesions associated with GLS from 25 fields at 54 sampling sites across seven watersheds. Of the Cercospora isolates, 648 (94%) were recovered from 81 lesions collected from the Chemung, Tioga, and Owego-Wappasening watersheds. The isolates could be differentiated to two groups based on morphological traits. Two species-specific histone H3 primers were used to characterize 112 isolates representative of the two groups, confirming 32 and 77 isolates to be Czm and Cz, respectively. Among the 25 fields in which GLS pathogens were detected, only one species was detected in 16 fields, while both species were found in nine of the fields. Both Czm and Cz were isolated from three of the 81 lesions for which multiple isolates were analyzed. After adjusting for the detection probabilities, the occurrence of Czm and Cz were modeled by logistic regression based on the presence / absence binary data corresponding to various geographic variables. The results revealed that latitude was the most significant (P=0.0262) predictive variable for Czm occurrence, with a statistically significant positive coefficient of 0.91 and an odds ratio of 6.2 for latitude zone in a range from 42°00‟N to 42°15‟N. This indicated that Czm was more likely to be detected in southern than central part of New York State. Logistic regression model fitted to the observed data of Cz occurrence revealed that watershed was the only significant predictor of the probability of Cz occurrence. Based on the parameter estimates ([beta]) and odds ratio (OR) for Chemung ([beta]=2.52, OR=16.5) and Seneca ([beta]= -2.59, OR=0.1) watersheds in final logistic regression model, it was suggested that Cz was more likely to be detected in Chemung, while it was less likely to be detected in Seneca. These results might be explained by the differences in climatic conditions and weather trends observed between Chemung and Aurora. Additionally, there was a positive and moderate interspecific association between Czm and Cz occurrence across the 54 sampling sites. These results suggested that the Cz population, considered a new-comer, has acclimated to the new environment and responded similarly to Czm to host and environmental variations. However, the higher frequency of Cz detection in the Southern Tier of New York State, especially in Chemung watershed, implied that, in addition to temperature and latitude factors, there is a specific environmental or geographical condition around this region more favorable for the colonization of Cz than Czm.