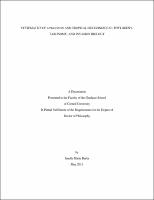 The genera of Polygonaceae have historically been segregated into two subfamilies, Eriogonoideae and Polygonoideae, based on a few key morphological characters. Using ITS, morphology and five chloroplast markers, a phylogeny for Eriogonoideae was reconstructed, with an emphasis on sampling of the tropical genera. Results support the placement of nine of twelve woody, tropical genera within Eriogonoideae, where these genera form a paraphyletic assemblage giving rise to Eriogoneae (Eriogonum and allies). My work corroborates previous phylogenetic studies, and suggests a broader circumscription of Eriogonoideae. Also based on these results, I propose the resurrection of a third subfamily, Symmerioideae, in Polygonaceae, and propose two new tribes, Gymnopodieae and Leptogoneae, in Eriogonoideae. Within the subfamily, the genus Antigonon provides a systematic challenge. Although Antigonon is a small, easily-recognized genus, the boundaries of species within it have never been resolved satisfactorily. A taxonomic treatment for the genus is presented, based on morphology and molecular phylogenetic data from two chloroplast markers (psaI-accD, psbA-trnH ) and one nuclear marker (LFY , 2nd intron). Four species are described, and a new subspecies, Antigonon leptopus subsp. coccineum is proposed. Antigonon leptopus is also known as corallita, a pantropical invasive vine particularly problematic on islands. Spread of the invasive populations was investigated using data collected for this systematic project. Label data from herbarium specimens were used to map the spread of invasive A. leptopus over time. These data show the history of corallita introduced as a garden ornamental, with subsequent naturalization and escape. Molecular data from plastid DNA sequence were analyzed in a phylogenetic context. Results suggest introductions outside the native range were not from one seed source, as exemplified by the genetic variation found within one island locality. The known data of biology, spread and control of corallita are reviewed and summarized in an action alert.