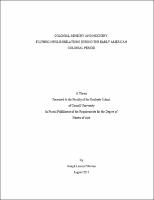 Most scholarship on American colonialism in the Philippines has focused on the actions of the United States government and American policymakers in the archipelago. I argue in this thesis that there is a significant alternative narrative to American colonialism in the Philippines that highlights the agency of Filipino actors and how they dealt with the perceived challenges of the colonial experience, specifically regarding the newly integrated territories occupied by Muslim communities principally located in Mindanao and the Sulu Archipelago. I focus on the early stages of American colonialism, defined roughly from 1900 to the 1920s, when American colonial policy was still in its formative stage and the inclusion of the Muslim areas into the nascent Filipino nation was not yet certain. I consider three important challenges faced by Christian Filipino politicians because American administrators favored a form of rule of the Muslims communities in the southern islands of the archipelago that was distinct from the lowland, Christian-occupied regions. The first challenge I consider is how the Filipino political elite in the early 1900s articulated their desire for the inclusion of Muslim areas of the archipelago while at the same time asserting Christian civilizational superiority. Although Muslims were governed separately from the rest of the colony from 1900 to 1913, they formed a crucial part of the Filipino national imaginary and the Filipino elite considered Muslim occupied regions essential to nation state formation even at the very beginning of the American colonial period. By including the Muslim regions in studies of early American colonialism in the Philippines, we are able to better understand the agency of Christian Filipinos in the colonial process. The second challenge to the Filipino elite concerned how they were to prove that they were capable of self-governance and autonomy, especially given the United States colonial mission of training Filipinos in democratic governance until they were ready to govern themselves. When Democrat President Wilson and his appointed governor-general for the Philippines, Francis Burton Harrison, put Filipinos in control of the colonial governance of Muslim occupied territories in 1916 following the passage of the Jones Law, Filipinos mimicked the United States' colonial policies and metrics in governing the Muslims to show their capability for autonomy. I argue that during this time period, Christian Filipino policies directed towards the Muslims were American in appearance and colonial in nature. The third challenge facing members of the Filipino elite was how to respond to Muslim resistance in Mindanao and American reservations that took this resistance as proof that Filipinos had not yet achieved the necessary level of "civilization" to govern themselves. The ways in which the Filipino elite responded both challenged and redefined the ideological motivation for American colonialism by highlighting American imperial interests in the resources of Mindanao and pointing to the contradictions embedded in US colonial policy. By analyzing Christian Filipino responses to the often forgotten possibility that the Muslim-dominated regions of the Philippines could have been separated from the rest of the archipelago, we see the strategies used by Christian Filipinos to both comply with and rebel against the specious American doctrine of colonizing the Philippines to train Filipinos in democracy. ii