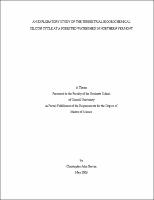 The importance of the global silicon cycle is becoming increasingly recognized because of its role in the consumption of atmospheric CO2. However, the terrestrial component of the silicon cycle is insufficiently understood, especially in temperate regions, since the majority of past research has ignored the effects of vegetation on the cycle. This study examines the terrestrial biogeochemical silicon cycle at a 40.5-ha sub-basin of the Sleepers River Research Watershed in Danville, VT. In particular, we examine the role of plants in the silicon cycle by analyzing silicon and germanium in plant leaves and cores, stream water, groundwater, soil water, bedrock, and soil obtained throughout 2005 from the watershed. Our results show that the amount of Si cycled by the vegetation is roughly the same as the amount weathered from bedrock and soil minerals. We also predict significant storage of Si in phytoliths in both the soil and the living biomass, slowing the rate of Si export from the watershed. Additionally, there appears to be a seasonal shift in the source of Si to the stream. We suggest this is because phytolith dissolution contributes more significantly in the early growing season than late in the season, when stream-flow is dominated by Si derived from mineral weathering.