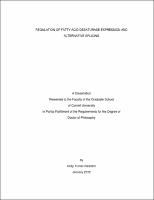 The FADS1 and FADS2 genes encode fatty acid desaturases required for synthesis of omega-3 and omega-6 long-chain polyunsaturated fatty acids (LCPUFA) important in the central nervous system, inflammatory response, and cardiovascular health. The adjacent FADS3 gene is a putative desaturase, and both FADS2 and FADS3 have alternative transcripts (AT) of unknown function. Here, genetic, dietary and molecular factors regulating expression and alternative splicing of FADS genes were identified. A FADS2 haplotype was significantly associated with FADS1 expression in lymphoblasts from Japanese International HapMap participants, and overlapped with a predicted sterol response element (SRE). Minor haplotype homozygotes had significantly higher induction of FADS1 and FADS2 after treatment with a statin drug or an LXR agonist, both activators of SREBP-1c. Sequencing identified 2 deletions within 150 bp of the putative SRE only present in minor haplotype carriers, suggesting this region controls response to SREBP -1c. We next examined the effect of dietary LCPUFA levels on baboon liver FADS gene expression. FADS1 and both FADS2 transcripts were downregulated by dietary LCPUFA, but FADS3 AT were upregulated, both in baboon liver and human liver-derived HepG2 cells. A PPAR[gamma] antagonist prevented FADS3 upregulation, while FADS1 and FADS2 were unaffected. In HepG2 cells, knockdown of the polypyrimidine tract binding protein (PTB) modulated alternative splicing of FADS2 and FADS3. PTB and FADS2AT1 were inversely correlated in neonatal baboon tissues, implicating PTB as a major regulator of tissue-specific FADS2 splicing. Omega-3 fatty acids decreased by nearly one half relative to omega-6 fatty acids in PTB knockdown cells, with a particularly strong decrease in eicosapentaenoic acid concentration and its ratio with arachidonic acid. The baboon results showing an opposing pattern and mechanism of regulation suggested a dissimilar function for FADS3 AT compared to classical desaturases, and PTB knockdown results suggested possible dominant negative inhibition by FADS splice variants. This is a rare demonstration of a mechanism specifically altering the cellular omega -3 to omega-6 fatty acid ratio without any change in diet/media. These findings reveal how genotype and alternative splicing affect response to diet and medication, and alter availability of eicosanoid precursors for cell signaling.