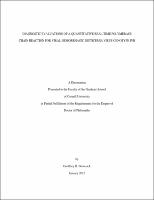 The emergence of viral hemorrhagic septicemia virus (VHSV) genotype IVb is reviewed with a particular emphasis on New York State. The first detection of VHSV in New York State in round gobies, Neogobius melanostomus, collected in 2006 is described. The diagnostic ability of a qRT-PCR test to detect this new genotype of VHS is then evaluated. Firstly, the qRT-PCR was used to retrospectively analyze results from a 2006 fish collection from the Saint Lawrence River. The qRT-PCR test detected a significantly higher sample prevalence of 37.0% compared to the 9.3% prevalence as determined by viral isolation. The negative predictive value of the qRT-PCR was determined to be 97.6%. The qRT-PCR testing also revealed positive detections in three additional species and three additional locations. Logistic regression models for disease outcome by both testing methods were compared. Next experimental infection trials of VHSV IVb in four aquacultured species were performed. The fish were given a concurrent thermal shock to promote eliciting clinical signs. Periodic sampling was performed to detect VHSV using virus isolation and qRT-PCR. The results show that these aquacultured species have different susceptibilities to VHSV. Using the qRT-PCR test allowed us to detect infections in exposed fish at sub-clinical levels which were not detected by virus isolation. Finally the persistence of VHSV on walleye, Sander vitreus, eggs was evaluated. Fertilized walleye eggs were exposed to VHSV and then treated with different concentrations of iodophor as a disinfectant. The effects of tannic acid, used for surface de-adhesion of eggs and an inhibitor of qRT-PCR testing, was also evaluated. Virus was isolated in 0 mg/L iodophor treated eggs up to three days post infection (DPI). Virus was also isolated in the 50 mg/L iodophor treated group at 1 DPI. Testing by qRT-PCR detected VHSV at many time-points throughout the experiments, including the end of the experiment. Inhibition of the qRT-PCR testing was found in many samples at earlier time-points.