Genetic And Genomic Analyses Of Kernel Development In Zea Mays 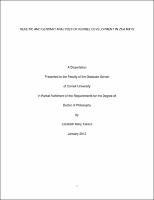 Two different aspects of maize kernel development are investigated. First, transcriptomic analyses of the landmark stages in embryo development were performed using laser microdissection and RNA-sequencing to investigate the ontogeny of shoot apical meristem (SAM). The SAM gives rise to all above ground vegetative tissues and forms during embryogenesis. To date this is the first study conducted to survey the maize SAM transcriptome when it forms during embryo development. Transcriptomic analyses of a developing embryo before a SAM forms, after a SAM is established, and when the SAM is initiating a foliar leaf reveals the following: (1) how a meristem is formed; (2) how a newly formed meristem differs from a mature meristem that is initiating foliar leaves; (3) the differences between the first three lateral organs (the scutellum, the coleoptile, and foliar leaf) elaborated during embryogenesis; (4) what distinguishes initiation of juvenile from an adult leaf; and (5) the differences between the SAM initiating a foliar leaf and a lateral meristem initiating a husk leaf. Second, embryo and endosperm development is investigated using the defective kernel mutant discolored1 (dsc1). Detailed phenotypic analyses of dsc1 mutant kernels reveal that DSC1 encodes a protein that is required to maintain the differentiation of both the embryo and the endosperm during kernel development. The DSC1 gene encodes an ADP-RIBOSYLATION FACTOR-GTPASE ACTIVATING PROTEIN (ARF-GAP) that colocalizes with the trans-Golgi network/early endosomes and the plasma membrane in transient expression assays in N. benthamiana leaves. DSC1 functions in endomembrane trafficking and the cargo that it transports is required for maintaining differentiated embryo and endosperm structures during kernel development.