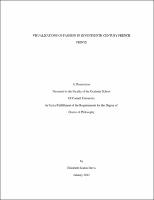 The period in French history which began in the mid-1670s and ended in 1715 with the death of Louis XIV, experienced a burgeoning French interest in the textile and fashion arts. At the same time, Paris was becoming the center of printmaking in Europe, and among its many products were large numbers of etched and engraved fashion prints. This study investigates a particular group of prints which depicted dress of the wealthy class of France, including images of well-known personages of the royal court. It explores the role of these images as early manifestations of a fashion print genre which flourished, but eventually declined, only to resurface and succeed later in the eighteenth century. These late seventeenth-century prints disseminated French fashion as part of a nascent fashion system developing in France, and contributed to the beginnings of French fashion hegemony. The methodology for this study derives from practices used in both dress history and art history. Data collection involved the examination and documentation of extant French prints, supplemented by the study of contemporaneous textiles and paintings. A set of criteria was developed in order to compile and quantitatively analyze the imagery presented in the 750 prints included in the study. Using primary sources, a qualitative analysis was applied to these findings in order to articulate the social and cultural meanings in dress of the period. The results from both analyses were used to formulate conclusions regarding their placement in the history of dress and fashion of late seventeenth-century France. Fashion prints provided a means for the movement of ideas from one region to another. Economical to produce in quantity, easy to transport, and less costly than paintings, they were popular in France, and soon appeared in neighboring European markets. Their appeal derived from artistic qualities as well as idealizations of beauty, fashion and power. Foreign audiences exposed to these images adopted and adapted French fashion, lending to a growing French dominance in European fashion. Conflicts in Europe disrupted their production as did changing attitudes promoted by the early Enlightenment, which found their messages no longer relevant.