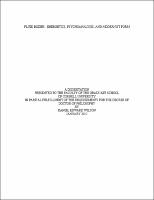 By the middle of the nineteenth century the science of thermodynamics had reached such a level of complexity and sophistication that it seemed all phenomena-from the activity of physical bodies to the intricacies of human psychology to the fate of the cosmos-could be explained through its laws. While the law of conservation of energy, which proposes that energy can be transformed but neither created nor destroyed, seemed to indicate that nature was in a constant state of flux, the second law of thermodynamics revealed that these transformations will lead to the thermodynamic heat-death of the universe, where all potential energy has been actualized and all movement has ceased. Thermodynamic thought at once suggested that the cosmos is a vibrant and vital system, and threatened to reduce nature to a dead system in which all difference is replaced by equivalence. A tradition of philosophical and scientific thought, beginning with James Tyndall and Herbert Spencer, and continuing through Henri Bergson, Fredrick Nietzsche and Gilles Deleuze, draws from the terms of a debate between H.L. Mansel and J.S. Mill over the a priori structure of the mind in order to argue that while the forms imposed by the human intellect might condemn the universe to a heat-death, the true logic of nature, beyond knowledge and beyond the individual life of the human, is a perpetual movement of synthetic and creative forces. Following from the observation that the body and brain are composed of the same forces and elements that are found in the material world, these grand cosmological tendencies come to inform a technical description of the human psyche. Beginning with his Project for a Scientific Psychology, which works to describe psychology as the effect of the flow of energy through the brain, Freud not only appeals to thermodynamic science to give a picture of how the mind works, but relies on the idea that there are distinct tendencies that inhere in these flows of energy to theorize the broad developmental structure of human life. In his linguistic revision of Freud, Jacques Lacan takes aim at Freud's reliance on energetics, arguing that within Freud's discourse the scene of energetics functions as a fantasy that relates the subject to a locus of natural meaning. Whether as an organic cause or as a privileged fantasy, the logic of energetics frames a central problematic of psychoanalytic thought. Within the literary tradition, the language of thermodynamics comes to situate discussions of psychology, ethics, and formal experimentation. Through readings of Walter Pater, Henry James, Oscar Wilde, Gertrude Stein, and Ludwig Wittgenstein, I argue that the impasses and expressive possibilities of thermodynamic thought become a model for the aesthetic and formal concerns of a literature that works to articulate the natural logic that situates the human.