Thananchai Pandit Chadok: The Cultural Transmission Of A Jataka Tale 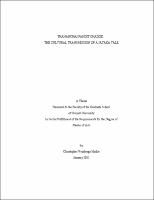 The Thananchai Pandit Chadok (TPC) is a long Buddhist birth story existing in Pali and Thai versions that circulated in palm leaf texts in central Thailand, perhaps as early as the 14th century. After a discussion of the nature and diversity of the Buddhist jātakas and their place in Thai art and literature, a summary and partial translation of the Thai version of TPC is presented. Its bodhisatta hero is a royal pandit who answers numerous riddles posed by the king, in this way exemplifying the perfection of wisdom. His answers, drawing on a variety of sources of Buddhist doctrine, including other jātakas and nīti aphorisms, constitute a series of discourses on moral topics, including the nature of the ideal Buddhist polity. As a result the tale has a compartmentalized structure and, given the premodern context, may have served as a kind of practical compendium or handbook for moral teaching or religious oratory. The thesis also examines the relationship of TPC to two better-known texts with a similar protagonist, the Mahosot jātaka (MJ) in the Pali Canon, and the Thai trickster legend Sri Thanonchai (ST). MJ clearly served as a model for the authors of TPC, who expanded certain sections (on the sage's marriage) and added others (his conversion of a yakkha.) By contrast, ST is an irreverent antitext, its hero an ambitious and amoral royal servant who subverts authority through puns and taking orders literally, all for personal gain. The story is well-known in Thailand, and in the modern Thai public sphere, where Buddhist moralizing plays a normative role, it has taken on added political meanings. Juxtaposition of the two texts can help us understand the interplay between didactic and satirical modes which is a salient feature of contemporary Thai public discourse.