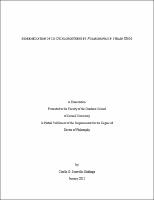 Because Polaromonas sp. JS666 is able to aerobically oxidize cis-dichloroethene (cDCE) as sole carbon and energy source, it is a promising candidate for use as a bioaugmentation agent at cDCE-contaminated sites. To test the feasibility of using JS666 for bioremediation, we conducted microcosm studies with subsurface material from six aerobic, cDCE-contaminated sites. Under favorable conditions, JS666 was able to degrade cDCE in every sediment or groundwater with which it was inoculated. Additionally, JS666 showed some success when challenged with an alternate carbon source and/or competitive microorganisms. Further, a DNA-based probe was used in conjunction with quantitative PCR to track the abundance of JS666 in microcosms. We found the probe accurately and precisely tracks growth when suspected predation is not present. We were able to resolve the accuracy and precision of the probe and determine how measured JS666 cells correlated with variations in microcosm performance. Moreover, a positive result from this probe suggests that degradation can occur in suitable environmental, conditions, as the DNA-target does not persist long after cell death within environmental samples. To design a more effective bioindicator - one that is based on a gene directly involved with cDCE degradation - fundamental knowledge about the metabolic pathways of the organism is necessary. While there are hypotheses of parallel pathways employed by JS666, currently the cDCE degradation pathway is not completely elucidated. In order to better understand the genetic regulation of this organism, we performed a suite of studies in attempt to observe the pattern of expression of putative genes found to be upregulated during cDCE degradation under dynamic conditions. These experiments suggest that a putative haloacid dehalogenase gene is involved in degradation, and it may be possible to surmise which genes are involved with oxidative stress. However, we found that the window of response of JS666 was most likely too small to be able to make this approach useful. Collectively, these studies suggest that it is possible to employ JS666 for bioaugmentation of aerobic, cDCE-contaminated sites, validate the utility of the DNA-based probe for site assessment, and further our understanding of the metabolic functioning of this organism.