Flight And Symbolic Modeling Of A 3D Printed Ornithopter 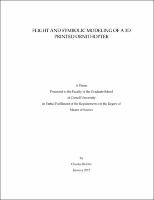 The work described in this thesis represents a set of novel solutions to several challenges involved in the design and flight of hovering ornithopters as well as the measurement and analysis of lift forces produced by wings flapping in air. First, a method was developed to 3D print functional flapping wings. The use of 3D printing technology has greatly expanded the possibilities for wing fabrication, allowing wing shapes and structures to replicate those of real insects or virtually any other design. It has also reduced the time required for wing fabrication to under one hour. A passively stable hovering ornithopter with a mass of 3.89 grams was constructed using the 3D printing technique and was flown for 85 seconds. This flight demonstrates the functional utility of printed materials in the construction of flapping wings and ornithopters, which are important experimental capabilities for understanding the principles of insect flight and control. 3D printed wings were then used to conduct aerodynamic experiments and an apparatus was constructed to measure the instantaneous lift forces produced by flapping wings at the scale of those used in micro air vehicles, with Reynolds numbers in the range 2500-5000. Custom software was written to extract the three dimensional kinematics of flapping from high-speed video recorded during each experiment. Finally, the experimental data were analyzed to measure the accuracy of several quasi-steady lift force equations from the literature, and additional models were developed using a data-mining process based on the Eureqa symbolic regression software. The models developed by Eureqa were more accurate than analytical equations and were much simpler, as measured by equation size. Furthermore, Eureqa automatically separated the experimen- tal data into sums of distinct terms with understandable physical significance, such as translational aerodynamic lift and inertial forces, with no prior knowledge of the structure of the system. This result suggests that Eureqa could be used to lend insight in parsing the primary dynamic components in a wide variety of complex systems.