New Approaches For The Synthesis Of Biodegradable Polymers 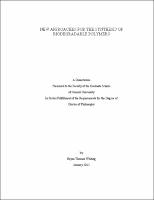 The development of the field of polymer science and the rise of plastics as ubiquitous materials in almost every aspect of our daily lives is one of the defining scientific achievements of the 20th Century. Ironically, concerns with disposal of the ever-increasing amounts of plastics as well as uncertainty surrounding the future of petroleum-based chemical feedstocks have led 21st Century scientists to investigate alternatives to these very same materials. Biodegradable polymers represent a way to continue the use of plastics in many applications without concerns about long-term accumulation. Additionally, biodegradable polymers offer many properties not found in traditional polymers, most notably their compatibility with biological systems, allowing them to act as ideal materials for biomedical research. This work focuses on new and efficient syntheses of biodegradable polymers, particularly through the use of catalysis. First, the synthesis of biodegradable cyclic polyketals was investigated in the hopes of generating high molecular weight materials. Polyacetals and polyketals are interesting alternatives to more established polyester-based biodegradable polymers in that they do not degrade to acidic species upon hydrolysis. Additionally, because polyketals are stable at neutral pH, but degrade quickly under mild acidic conditions, they are able to act as pH-sensitive materials. However, their syntheses are typically complicated and result in low molecular weight polymers, limiting their utility. Through the Lewis acid catalyzed intramolecular cyclization of epoxide-ketones, strained bicyclic ketals were generated that act as monomers for cationic polymerization. This methodology allowed the synthesis of polyketals with exceptionally high molecular weights. In addition to the study of ketal-based polymers, biodegradable polyesters were investigated. The synthesis of a new class of carboxylic acid-containing polyesters was developed via the self-condensation ring-opening polymerization of anhydridealcohols. These anhydride-alcohol monomers may be produced from catalytic carbonylation of epoxides, allowing a number of backbone functionalities to be generated for the tuning of properties. Polyhydroxyalkanoates, a well known class of biodegradable polyesters, were investigated through both the creation of new carbonylation catalysts for efficient synthesis of their !-lactone monomers as well as the creation of new catalysts for controlled !-lactone ring-opening polymerizations. Finally, unrelated to polymerization, the use of carbonylation for the catalytic synthesis of interesting materials.