The Strength Of The City: Morale In Thucydides' Histories 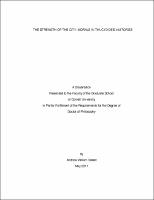 This thesis is a study of morale in Thucydides' Histories. As a general himself, Thucydides had firsthand knowledge of the importance of soldiers' morale, and his emphasis on seeing the entirety of the war shows that he was also able to observe the collective morale of city-states over the long term (5.26.5). Each chapter investigates the use of one term that relates to morale in Thucydides' narrative and earlier literature. Word studies of andreia, tolma, prothumia, and rhome show how the Greek language was being adapted over the course of the 5th century to allow greater abstraction and facilitate theoretical discourse. In addition, the results of these studies reveal the central role of morale in Thucydides' Histories. Morale is not just the confidence of a single soldier; it has to do with a group's collective response to adversity and danger. The group can be a contingent in an army, an entire army, a city-state, or a confederation. The shared values of the group will determine when and how its members willingly risk death, which is the ultimate proof of good morale. Thucydides represents a clash of two very different Greek city-states, whose customs and values affect the way they wage war and respond on the battlefield. In books six and seven, morale becomes a major theme, as Thucydides repeatedly returns to the mindset of the Athenians, Syracusans, Lacedaemonians, and Corinthians. The confidence (rhome) and enthusiasm (prothumia) of Athens' enemies keep increasing, until the morale (rhome) of the Athenians in Sicily totally disintegrates because Athens shows too much boldness (tolma) rather than courage (andreia). Although the terms and methods of analysis constantly evolve, morale remains a chief concern even in contemporary conflicts. The tensions between conservative and innovative, daring and cautious that so deeply affected the course of the Peloponnesian War have wider resonance. Despite the great differences in time, technology, and resources, the human element of warfare remains much the same. By understanding why the Greeks fought and died two and a half millennia ago, we will better recognize our own feelings about and responses to war.