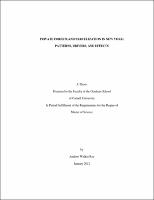 Parcelization, the division and ownership transfer of properties, produces significant changes for forested landscapes and the people that own them. Previous research has focused on the effects of parcelization on average forest parcel size and forest composition, but little has been done to examine parcelization's underlying causes and broader social effects. My thesis examines the scale of private forestland parcelization in New York, as well drivers of the phenomenon and reactions by foresters that work with private forest landowners. Quantitative analysis of property sales data was used to determine the rates of forest parcelization in eastern New York, the decision-making process of parcelizing landowners in three Hudson Valley counties was examined using a mixed-method approach, and qualitative methods were used to understand how parcelization affects the business practices of foresters across the state. My findings suggest that over seven percent of private woodlands were parcelized in the state over the last decade, that there are distinct types of parcelizing landowners, and that many foresters are adapting their practices in response to these changes.