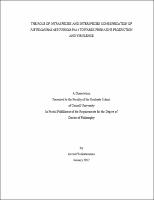 Pseudomonas aeruginosa is an opportunistic pathogen and a model organism for studying quorum sensing (QS) - bacterial communication via secreted signaling factors (acyl homoserine lactones). P. aeruginosa also produces electrochemicallyactive compounds that are called phenazines, which help it to respire with an electrode in bioelectrochemical systems (BESs). Phenazine production by this microbe is strongly controlled by QS amongst other environmental stimuli. In the BES microbiota, we proposed that intraspecies and interspecies communication(s) could influence phenazine production by P. aeruginosa subsequently affecting current generation. Intraspecies communication: First, we showed that QS modulates the current production by P. aeruginosa in BESs by controlling phenazine production. The current and phenazine production by a wildtype strain (WT) and a mutant were investigated under conditions that favor or inhibit QS. As hypothesized, anaerobic current production by the mutant was 5.8-fold higher with extraneously supplied QS signaling lactones than without. i Interspecies communication: Next, we studied P. aeruginosa in association with a fermenter (Enterobacter aerogenes) and found that the current generation by this coculture was 14-fold higher than either of these two bacteria alone. This phenomenon was due to metabolite-based mutualism in which a fermentation product of E. aerogenes stimulated specific phenazine production (i.e., pyocyanin) by P. aeruginosa. E. aerogenes switched from fermentation to electrode respiration with pyocyanin. We further demonstrated that common fermentation products of several microorganisms, which co-habit infections with P. aeruginosa, significantly increase the virulence of P. aeruginosa compared to the common blood sugar - glucose. Finally, we demonstrated that in a defined mixed-culture BES, bacterial synergism between P. aeruginosa and E. aerogenes results in phenazine-based mediated electron transfer (MET) becoming equally important to direct electron transfer by Geobacter sulfurreducens. A mechanistic mathematical model revealed that in the synergism, E. aerogenes possessed faster kinetics of phenazine reduction, thereby, resulting in improved MET compared to a pure culture of P. aeruginosa. Overall, we showed that intermicrobial cooperation considerably affects the phenazine production and virulence of P. aeruginosa with implications in microbial communities outside BESs. ii