Performance Practice At The English Organ Circa 1880-1940 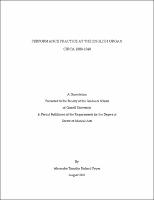 PERFORMANCE PRACTICE AT THE ENGLISH ORGAN CIRCA 1880-1940 ALEXANDER TIMOTHY RICHARD PYPER, D.M.A. CORNELL UNIVERSITY 2011 Early 20th-century English organ music is both relatively well known and surprisingly neglected: well-known to organists connected to the Anglican church (for whom it is part of what is often seen as a continuous performance tradition) but neglected as an object of critical performance study. My own research suggests that, in general, performances of this music today are significantly different from those of the early 20th century. My goal is to come closer to understanding how this music sounded at the organ soon after it was composed, and how organists achieved their musical effects. The strong influence of French organ pedagogy and performance culture in the English-speaking world is a particularly formidable barrier to achieving this goal; recognizing an often-unconscious French influence is a critical first step for the presentday organist who wishes to examine early 20th-century English organ music on its own terms. This influence, combined with more transnational modernist performance aesthetics, often leads to metronomically rigid performances of English repertoire that privilege legato and staccato to the exclusion of more intermediate touches. My analysis of historic recordings, treatises and other texts has led me to believe that a variety of touches and a great deal of rhythmic flexibility are crucial to the performance of early 20th-century English organ music. This dissertation focuses in particular on the meaning of the multivalent slur symbol in the context of this repertoire. While it can be an indicator of legato, this symbol is also used liberally to indicate a "phrase," and the latter context may or may not require a legato performance style. Registration constitutes a crucial aspect of the performance practice of this repertoire, and this dissertation considers some of the ways that registration practices in the period related to issues of timing and touch at the organ. The writings of music historian Donald Tovey (1875-1940), who was closely acquainted with Walter Parratt (1841-1924), organist of St. George's Chapel, Windsor, provide a particularly useful general view of music-making at the organ in early 20thcentury England and are considered in the third chapter. For a detailed analysis of performance practice in the period, the dissertation turns in the final chapter to two historic recordings of Herbert Howells' Rhapsody in D-flat, Op. 17, No. 1 and compares these with two more recent recordings. The recordings by Harold Darke (1888-1976) and Herbert Sumsion (1899-1995) are a world apart from the recent renditions and demonstrate that a culture of transcription pervaded all aspects of English organ playing; paradoxically, the modern organist who wishes to perform Howells and his contemporaries with aesthetic conviction must let go of the notion of 'fidelity to the score.'