Examining The Role Of Angiogenic Factors And Early Developmental Defects In The Pathogenesis Of Pre-Eclampsia In A Mouse Model, Bph/5 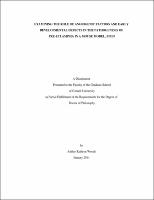 Pre-eclampsia (PE) is a devastating condition that affects 5-8% of pregnant women and is the leading cause of fetal and maternal deaths worldwide. The etiology of this disorder, however, is largely unknown. The BPH/5 mouse model is the only known rodent model that spontaneously develops the symptoms of PE as well as many of the placental pathologies associated with the human condition. As the pathogenesis of PE is known to start before the symptoms begin, this disease is very difficult to study in women. As such, this mouse model is invaluable in examining early pregnancy events and elucidating the pathophysiology of this disorder. Angiogenic factors have been promising biomarkers of PE in women. We found that the angiogenic profile in BPH/5 mice mimics that of women at high risk of developing PE with a decrease in the pro-angiogenic factors vascular endothelial growth factor (VEGF) and related placental growth factor (PGF). Using a viral gene transfer strategy to increase systemic levels of one of these important angiogenic factors, VEGF, we provide evidence of a functional link between diminished VEGF levels and the hallmark symptoms of PE in BPH/5 mice. The BPH/5 model of PE also exhibits significant fetal demise throughout pregnancy. One third of conceptuses are lost by mid gestation. To further characterize early pregnancy events in BPH/5, we used ultrasound to score embryos based on their health status. We were able to detect evidence of developmental challenge in vivo in a subset of embryos prior to previous necropsy data. Using fetoplacental units with varying development/health status, we performed gene expression microarray studies to examine the molecular cues to fetal demise in this model. Challenged fetoplacental units show dysregulation in functional pathways related to angiogenesis, development and apoptosis. Finally, as the placenta plays a pivotal role in the development of PE, and the BPH/5 model shows marked placental abnormalities, we examined whether these placental defects in BPH/5 could be traced to the peri-implantation period when this organ is established. We found significant pre-implantation embryo maturation delay along with premature maternal endocrine signaling in BPH/5 mice, suggesting asynchronous timing of these important events involved in implantation. This was accompanied by implantation defects as indicated by abnormal spacing of implantation sites, as well as morphological and molecular abnormalities in early BPH/5 implantation sites compared to controls. Using a protocol to artificially synchronize implantation events in BPH/5, we were able to rescue the implantation clustering defect, the molecular dysregulation in early implantation sites, and importantly, several later placental abnormalities including placental expansion toward the decidua and umbilical blood flow. The research in this thesis highlights and confirms the important role of angiogenic factors in successful and healthy pregnancies, provides clues to the molecular signature that may underlie fetoplacental defects associated with PE, and sheds new light on early peri-implantation events that may set the stage for the development of PE and perhaps other disorders of pregnancy.