Aporetic Thinking And The Production Of 'Race': W.E.B. Du Bois, Frantz Fanon, And The Unmaking Of The Negro 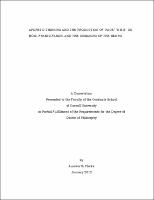 Aporetic Thinking and the Production of 'Race' focuses on the early critical writings of W.E.B. Du Bois and the central theoretical texts of Frantz Fanon. Usually viewed as articulating the conflict between a biological and a socio-historical notion of race Du Bois's early texts are generally considered a failed attempt to disentangle himself from the constraints of nineteenth century racial discourse. Moving away from the limitations of this interpretation, I claim that Du Bois's conception of race emerges from his methodological engagement with the defining question of his early work, "What is a Negro?" My dissertation contends that the methodological imperative guiding his early analysis of this question places him alongside Max Weber, Heinrich Rickert and the German neo-Kantians, and his mentor Gustav Schmoller in his attempt to establish the epistemological basis of social scientific practice. I link the epistemological concern that guides Du Bois early analysis of the 'Negro problem' to the emergence of his distinct notion of race. His increased focus on the epistemological substrate constitutive of the phenomena he calls the 'Negro' and his inability to determine it in a manner he considers satisfactory coincides with his accelerated shift to the biographical as the modality through which the paradox of the 'Negro' is thought. I suggest that race, as formulated by Du Bois in texts as diverse as The Negro, Dusk of Dawn, "The Conservation of Races," "Sociology Hesitant," Darkwater, and Black Reconstruction, is reducible to neither biology nor culture. Rather than this often rehearsed dichotomy I propose that Du Bois's notion of race gestures towards what contemporary theory identifies as the space of the 'political'. It is on this point that the problematic Du Bois confronts insinuates itself within the work of Frantz Fanon. In "Aporetic Thinking" I argue that the proliferation of theoretical languages within Fanon bears witness not to a seeming theoretical confusion on his part but rather speaks to the inadequacy of available theoretical languages to define or register the being of the Negro. Rather than championing one specific theoretical 'Fanon' (e.g. psychoanalytic, Marxist, phenomenological, etc.) my analysis, read within the context of Heidegger's "Age of the World Picture," contends that Fanon's work is best viewed as a challenge to the dominance of 'theoretical understanding' itself and of the subject it produces. The slippage within Fanon between 'theory' as discursive modality and 'theory' as a form of understanding is the site, I argue, from which Fanon's conception of what constitutes the space of colonial politics must be thought.