History Curricula And The Reconciliation Of Ethnic Conflict: A Collaborative Project With Burmese Migrants And Refugees In Thailand 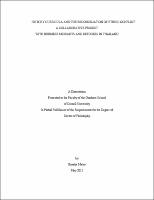 I use ethnography, critical discourse analysis, and survey research to investigate the potential of history curricula both to foment inter-ethnic animosity and to further reconciliation in conflictaffected societies. I take Burma's sixty-year-long civil war and ethnic conflict as a case study, conducting research in collaboration with Burmese migrants and refugees in Thailand. I also address the dynamics of international aid to education and the ethics of conducting research in this setting. This dissertation includes four distinct articles, each concerning an aspect of these issues. In the first article, I argue that Burmese history textbook discourse from the dynastic era to the present illustrates the "ethnification" of Burmese (myanma) identity and the classicization of Burman monarchies as a basis for nationalism. In the second article, I conclude that a high school curriculum based on primary source documents juxtaposed to reveal multiple perspectives has the potential to delegitimize violence and promote critical thinking. I also find that history curriculum revision workshops are most likely to function as "intergroup encounters" promoting reconciliation among participants if a) individuals from outside the "party line" mainstream of all sides are included; b) there are structures in place to ensure the participation of people of lower status; c) participants analyze the discourse of textbooks written by opposing sides in the conflict alongside primary source documents; d) participants conceptualize reconciliation and critical thinking as major purposes of teaching history; and e) parties outside the conflict fund and support, rather than directly control these efforts. In the third article, I argue that the interventions of international actors in the education of Burmese migrants and refugees constitute a process of neo-colonial "missionization" in which ideas about schooling are negotiated and hybrid subjectivities particular to post-colonial, postconflict settings emerge. In the fourth article, I explain why the written consent process mandated for human subjects research by Institutional Review Boards was not well suited to the cross-cultural, collaborative, ethnographic education project that I conducted. I present an alternate model for ethical relations in research based on a Levinasian face-to-face consent process that cannot be preformulated or proceduralized.