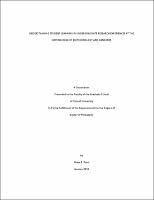 Undergraduate research experiences (UREs) have been at the leading edge of undergraduate science education reform efforts, having the potential to involve students in authentic and cutting edge scientific inquiry. While research has shown that undergraduate research can be effective in recruiting and retaining science students and increasing students' confidence in their abilities to do research, the literature on students' science-learning through participation in undergraduate research is scant. This study described what students learned about the practice of scientific inquiry, the natures of scientific knowledge (NOS) and inquiry (NOSI), and whether students developed epistemologically through participation in summer UREs in cutting edge biotechnology laboratories. This study also explored the types of research projects and intern-mentor transactions in the UREs in order to explain students' gains or lack of gains. I employed a mixed-methods approach involving a pre-post assessment of gains and an exploratory investigation of the laboratory research situations. In general, interns' independent practice of inquiry was of the most basic inquiry skills (e.g. collecting and summarizing data), but their guided practice included many of the more advanced skills important in developing scientific thinking (e.g. design, evaluating evidence, revising assumptions/hypotheses, and constructing arguments). While few interns made gains in understandings about NOS, many interns made gains in understanding several aspects of NOSI. Gains in NOSI were associated iii with greater autonomy in the research and greater independent practice of more advanced inquiry skills. None of the interns made detectable gains in their epistemological thinking. However, students' level of epistemological development showed a significant, positive relationship with their ability to understand aspects of NOS and NOSI. The exploratory investigation found that multifaceted research projects (both observational and hypothesisdriven investigations) and tool development projects provided more opportunities to practice advanced aspects of inquiry in this setting. Interns in mentor-centric transactions, those most highly prescribed, generally achieved lower program inquiry scores than interns in balanced and intern-centric situations. Interns engaged in more indeterminate projects, where methods were less prescribed and outcomes less predictable, generally made greater gains in understandings about NOSI. Gains in understandings about NOS showed no relationship with project or transaction type. In some cases, gains in NOS were linked to critical incidents, for example the discovery of anomalies. iv