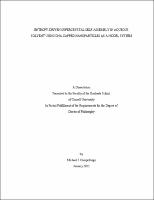 Superlattices and crystals comprised of polymer-capped nanoparticles have generally been produced by the evaporation of organic solvent with the aid of optimized nonspecific forces between the polymer ligands. In contrast with these entropy-based strategies, recent efforts have exploited the enthalpically-favorable interactions between DNA molecules conjugated to nanoparticle surfaces to drive the formation of nanoparticle crystals in aqueous solvent. However, if treated as a pure polyelectrolyte without specific base-pairing interactions, control can still be exercised over the effective size and rigidity of the DNA corona by adjusting parameters such as surface density and ionic strength. Such structural control is difficult to achieve in organic solvent, making entropy-driven crystallization in aqueous solvent worthy of investigation. Since the integration of biomolecule-based components with solid-state devices is becoming a new direction in nanotechnology, it is critical to better understand factors at play in the evaporation process. We produced nanoparticle superlattices by placing a droplet containing DNAcapped nanoparticles on a thin, micro-perforated film and allowing the droplet to evaporate. As the droplet shrank, smaller droplets were left behind in the perforations which packed the nanoparticles into free-standing, highly-ordered membranes upon evaporation. The membranes were of single-particle thickness and were fixed to the boundaries of the perforations. Real-time investigations of the crystallization process were performed using small-angle X-ray scattering (SAXS). These studies revealed that crystallization occurs almost immediately when base-pairing forces are present, but could also be induced by volume restriction in the absence of DNA base-pairing forces. The behavior of nanoparticles at the air-liquid interface was probed using a technique in which the X-ray beam was oriented to skim the interface, revealing the formation of crystalline Gibbs monolayers under optimal ionic strength conditions. In all of these crystalline formations, DNA sequence length played a critical role in determining the interparticle spacing. In addition, thermodynamic models were developed to elucidate the spring-like behavior of the DNA corona during the assembly process, which could potentially be used to guide the assembly of nanoparticle crystals with unique optical properties.