Explorations Into The Inertial And Integral Scales Of Homogeneous Axisymmetric Turbulence 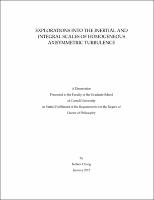 A flow generator is described in which homogeneous axisymmetric turbulent air flows with varying and fully controllable degrees of anisotropy, including the much studied isotropic case, are generated by the combined agitations produced by 32 acoustic mixers focusing at the center of the system. The axisymmetric turbulence in a central volume of the size of the inertial scale is shown to have negligible mean and shear. The Taylor Reynolds number is about 480. The influence of large scale anisotropy on the turbulence is examined from three aspects, namely the velocity structure functions, the velocity correlation functions, and the integral lengths. The directional dependence of two different second order transverse structure functions, in which one of them has separations stretched along the axis of symmetry of the turbulence and the other one normal to it, is studied. It is shown that the inertial range scaling exponents, determined using the extended-self-similarity procedure, and the Kolmogorov constants of the two structure functions are unaffected by the direction in which the structure functions are measured. As an extension, because of its relevance to the study of intermittency, the directional dependence of transverse structure functions of the fourth to the sixth order is studied. Despite some issues with measurement noise and statistical convergence, some indications are found that anisotropy in the velocity field intensifies the asymmetry of the probability density of the velocity increments. In addition, some evidence is found that the inertial range scaling exponents of the fourth, fifth, and sixth order are independent of the anisotropy. Finally, it is found that, except in the isotropic case, the second order transverse velocity correlation functions deviate from each other at the large scale with increasing anisotropy. A self-similarity argument similar to one found in the study of critical phenomena is proposed. It is shown that the argument leads to a power-law relationship between the large scale velocity fluctuation and the correlation length, with an exponent that depends on the inertial range scaling exponent of the turbulence. The data collapse predicted by the self-similarity hypothesis is verified. It is demonstrated that the value of the power-law exponent is consistent with the value of the inertial range scaling exponent.