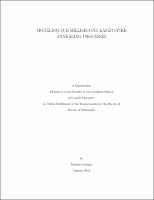 Laser Spike Annealing (LSA), a non-melt thermal process in the sub-millisecond time regime, has demonstrated significant advantages for ultra-shallow junction formation at the 32 nm and later nodes. A comprehensive approach for modeling multiple physical processes during laser spike annealing is presented in this work. A physics-based model for optical coupling of IR and visible laser sources is developed. This model incorporates complex interplay of temperature and wavelength dependent material properties on the optical absorption of laser radiation into the substrate. An efficient finite difference simulation framework for solving the heat transport is presented. Characteristic behavior of temperature profiles during laser spike annealing in 2D (infinite beam) and 3D (finite sized beam) is illustrated. Cornell Laser Annealing Simulation Package (CLASP), the simulation framework developed and used in this work is documented with examples. The temperature profiles obtained from the 3D simulations were validated using experimental measurements. Thin film platinum resistors were used to directly measure temperature profiles during laser spike annealing (LSA) with high spatial and temporal resolution. Observed resistance changes were calibrated to absolute temperatures using the melting points of the substrate silicon and thin gold films. Both the time-dependent temperature experienced by the sample during passage of the focused laser beam, and profiles across the spatially dependent laser intensity, were obtained with sub-millisecond time resolution and 50 micron spatial resolution. Full 3D simulations incorporating both optical and thermal variations of material parameters were compared with these results. Accounting properly for the specific material parameters, good agreement between experiments and simulations were achieved. The undesirable effect of the high temperatures thermal stresses and dopant diffusion were studied in this work with the aim of mitigating their effects. Calibrated temperature profiles were used as inputs to in Finite Element Method (FEM) simulations to calculate thermal stresses during laser spike annealing. The effect of anisotropic material properties on thermal stress was discussed, and the optimal crystallographic orientations for laser spike annealing were identified. Haasens law, a macroscopic yield stress condition, was used to predict upper limits on thermal stress. It was found that a phenomenological model based on isothermal experimental observations is not valid in the dynamic temperature fields during laser spike annealing. A mesoscopic dislocation dynamics based model was thus developed to model yield point in the context of laser spike annealing. This model was used to predict the optimal temperature range of operation. Continuum models for studying dopant diffusion are no longer sufficient in the spatio-temporal scales in laser spike annealing, and the effect of noise and variability inherent in diffusion needs to be captured. An accelerated stochastic simulation method was developed for studying the effect of noise in dopant diffusion and dynamics in particular and reaction diffusion systems in general. This accelerated method was compared to others presented in literature and its strengths were highlighted.