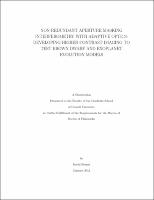 This dissertation presents my study of Non-Redundant Aperture Masking Interferometry (or NRM) with Adaptive Optics, a technique for obtaining high-contrast infrared images at diffraction-limited resolution. I developed numerical, statistical, and on-telescope techniques for obtaining higher contrast, in order to build an imaging system capable of resolving massive Jupiter analogs in tight orbits around nearby stars. I used this technique, combined with Laser Guide Star Adaptive Optics (LGSAO), to survey known brown dwarfs for brown dwarf and planetary companions. The diffraction-limited capabilities of this technique enable the detection of companions on short period orbits that make Keplerian mass measurement practical. This, in turn, provides mass and photometric measurements to test brown dwarf evolution (and atmosphere) models, which require empirical constraints to answer key questions and will form the basis for models of giant exoplanets for the next decade. I present the results of a close companion search around 16 known brown dwarf candidates (early L dwarfs) using the first application of NRM with LGSAO on the Palomar 200" Hale Telescope. The use of NRM allowed the detection of companions between 45-360 mas in Ks band, corresponding to projected physical separations of 0.6-10.0 AU for the targets of the survey. Due to unstable LGSAO correction, this survey was capable of detecting primary-secondary contrast ratios down to [INCREMENT]Ks ~1.5-2.5 (10:1), an order of magnitude brighter than if the system performed at specification. I present four candidate brown dwarf companions detected with moderate-to-high confidence (90%-98%), including two with projected physical separations less than 1.5 AU. A prevalence of brown dwarf binaries, if confirmed, may indicate that tight-separation binaries contribute to the total binary fraction more significantly than currently assumed, and make excellent candidates for dynamical mass measurement. For this project, I developed several new, robust tools to reject false positive detections, generate accurate contrast limits, and analyze NRM data in the low signal-to-noise regime. In order to increase the sensitivity of NRM, a critical and quantitative study of quasi-static wavefront errors needs to be undertaken. I investigated the impact of small-scale wavefront errors (those smaller than a sub-aperture) on NRM using a technique known as spatial filtering. Here, I explored the effects of spatial filtering through calculation, simulation, and observational tests conducted with an optimized pinhole and aperture mask in the PHARO instrument at the 200" Hale Telescope. I find that spatially filtered NRM can increase observation contrasts by 10-25% on current AO systems and by a factor of 2-4 on higher-order AO systems. More importantly, this reveals that small scale wavefront errors contribute only modestly to the overall limitations of the NRM technique without very high-order AO systems, and that future efforts need focus on temporal stability and wavefront errors on the scale of the sub-aperture. I also develop a formalism for optimizing NRM observations with these AO systems and dedicated exoplanet imaging instruments, such as Project 1640 and the Gemini Planet Imager. This work provides a foundation for future NRM exoplanet experiments.