Ammonium, Nitrate And Phosphate Sorption To Water-Rinsed And Non-Rinsed Biochars 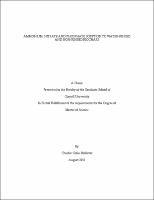 Water-rinsed and non-rinsed biochar (BC) was evaluated for nitrogen (N) and phosphorus (P) removal from aqueous solution in order to quantify its nutrient pollution mitigation potential in agroecosystems. Sorption isotherms were prepared for nutrient solutions of ammonium (NH4), nitrate (NO3) and phosphate (PO4) using BC of corn and oak feedstock, each pyrolyzed at 350[MASCULINE ORDINAL INDICATOR] and 550[MASCULINE ORDINAL INDICATOR] C highest treatment temperature (HTT). NH4 sorption was observed for rinsed Corn-BC and rinsed Oak-BC and a 200[MASCULINE ORDINAL INDICATOR] C increase in HTT decreased NH4 sorption for both feedstocks. Nitrate sorption was not observed in any of the rinsed or non-rinsed chars, which indicates a lack of anion exchange capacity (AEC) for nitrate removal. More P sorption was observed using non-rinsed OakBC relative to rinsed Oak-BC and no phosphate sorption was observed using rinsed or non-rinsed Corn-BC. A reduction of phosphate removal efficiency for the rinsed Oak-BC coincided with a loss of calcium (Ca) due to leaching during the pretreatment. Water leachable Ca increased with HTT for all BC, which suggests Ca mineral thermal transformation to a more soluble form. Low HTT BC leached more magnesium (Mg) and P and Corn-BC leached more Mg and P than Oak-BC. The transition to a micropore dominated surface area with increasing HTT could restrict nutrient leaching compared to lower HTT where mesopore surface area is abundant.