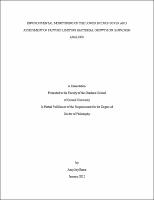 Pharmaceuticals and personal care products are increasingly recognized as important environmental pollutants and have recently gained the attention of both the scientific community and the public. A base-line study was conducted in the Lower Hudson River of New York State employing both analytical chemistry and endocrine bioreporters to monitor both traditional and emerging pollutants. 25 chemicals were detected via gas chromatography-mass spectrometry but only caffeine (average 186 ng/L) and the polycyclic musk 1,3,4,6,7,8-hexahydro-4,6,6,7,8,8hexamethylcyclopenta-[gamma]-2-benzopyran (average 80 ng/L) were found at quantifiable levels. Using in vitro Chemical Activated LUciferase eXpression (CALUX) bioreporters capable of measuring endocrine activity, we detected estrogenic (94-701 pg 17b-estradiol Eq/L) activity in all six samples, both androgenic (1.15 ng DHT Eq/L) and progestrogenic (1.6-4.08 ng/Org2058 Eq/L) activity in one and two samples respectively, but no glucocorticoid activity in any samples. The potential environmental fates and biological impacts of both these chemicals and activities are discussed. Since one must look beyond detection of the parent compound in order to understand the fate of pollutants, this dissertation also reports on the ability of Sphingomonas sp. strain Ibu2 to metabolize analogs of ibuprofen, a pharmaceutical that has been commonly detected in wastewater and aquatic environments around the world. While para-substituted iii aromatic compounds are typically reported to be more challenging to degrade, strain Ibu2 can grow on some para-substituted arylacetic acids but not on non-substituted ones. Catabolic rates for the degradation of both growth and non-growth substrates in the upper pathway and for meta cleavage (MC) in the lower pathway were measured. Non-growth substrates, 4-tolylacetic acid (4TAA), 2-propionic acid and phenylacetic acid, were found to cause the inhibition of MC activity as well as cell death. Spontaneous mutants with the ability to grow on 4TAA were characterized. The mechanisms behind MC activity inhibition and toxicity were examined and CoA-thioester intermediates were identified as toxic metabolites during aromatic acid metabolism. iv