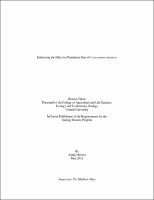 Effective population size (Ne) is an important parameter used to estimate the magnitude of genetic drift, a major evolutionary force, that a population experiences. Across many taxa Ne is one tenth smaller on average than the census population size because of overlapping generations, uneven sex ratios, and other demographic factors that increase the variance in reproductive success. Organisms that experience high fecundity, external fertilization, and larval dispersal, like the eastern oyster (Crassostrea virginica), are hypothesized to experience “sweepstakes reproduction”, or a high stochastic variance in reproductive success among individuals, resulting in a much lower Ne relative to Ncensus. Here the objective was to further test the sweepstakes hypothesis by estimating Ne in oyster populations using two distinct, direct measures. Temporal samples of C. virginica from two eastern Florida localities were genotyped for nine microsatellite loci to estimate Ne. Effective population size was estimated using two methods, a two sample moments-based temporal estimation and a single sample linkage disequilibrium estimation. Results from both methods are consistent with Ne between 500 and 10,000. These values are similar to past studies indicating a sweepstakes reproduction hypothesis, although not as extreme of a sweepstakes reproduction as some past work has suggested. However, predicted differences for allelic diversity and Ne were not detected between cohorts of spat (early juveniles) and local adults, preventing a strong conclusion that C. virginica is in fact experiencing sweepstakes reproduction based upon the tested indicators in this study.