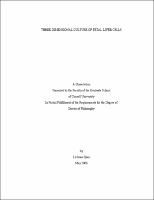 This thesis explored the influence of culture environment on proliferation and hepatic differentiation of fetal liver cells. Specifically, signals provided by soluble factors and culture substrates were examined. Comparison of a variety of culture medium conditions suggested that hepatocyte growth factor (HGF) is required throughout the culture period to induce the differentiation of liver stem cells into hepatic precursors, and to ensure the continual proliferation of stem cells and their progeny. On the other hand, timing of the addition of maturation-inducing factors such as oncostatin M (OSM) determines the kinetics of cell maturation. In the presence of HGF, adding OSM from the beginning results in concurrent growth and differentiation. In addition, the constant presence of protective agents such as ascorbic acid helps to enhance cell survival, leading to improved cell expansion and hepatocyte functions. Based on these findings, a modified culture medium was developed to achieve both optimal growth and differentiation. Cell expansion in this medium was about 2 fold of that under other tested conditions, whereas the specific albumin secretion rate was 2 - 3 times of the maximal values obtained with other conditions. Subsequently, characterization of fetal liver cells cultured on a variety of three-dimensional (3D) scaffolds, including decellularized liver matrices, collagen scaffolds, and poly(lactic-co-glycolic acid) (PLGA) scaffolds, showed that the cellular responses to soluble signals are modulated by culture substrates. Experiments using scaffolds prepared from blends of PLGA(50:50) and polycaprolactone (PCL) further suggested that cell expansion requires rigid and porous scaffolds, whereas differentiation is enhanced on more pliable substrates. Together, these results demonstrated that the in vitro behavior of fetal liver cells is regulated by both the soluble and physical cues present in their microenvironment. Furthermore, cell growth and differentiation are influenced not only by the regulatory factors that are present, but also by the timing of their addition. These findings would help to develop a culture system that employs dynamic integration of biochemical and substrate-related signals to control the growth and differentiation kinetics of fetal liver cells. They may also provide a foundation for developing technologies for applications of other liver stem cells and progenitors.