A biography of and interview with Charles W. Raker, VMD 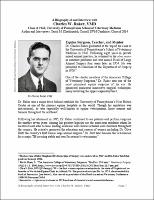 Charles W. Raker was one of the leading equine surgeons of the second half of the 20th century. Raised in Daylesford, Pennsylvania, he received his VMD from the University of Pennsylvania (UP) in 1942. After several years in general practice, he joined the faculty of the UP as a surgeon involved with all large animal species. As one of the founding faculty of New Bolton Center, he gradually developed a strong clientele for cases involving general and orthopedic surgery of horses. Starting in the 1970s, he began to concentrate on upper respiratory surgery and became a preeminent leader in that field. Raker helped establish the American College of Veterinary Surgeons in the 1960s and later became president of that organization. He was an outstanding teacher and mentor of both veterinary students and surgical residents, and was one of the first to train women large animal surgeons.