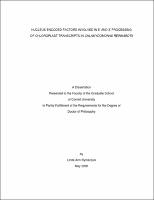 Chloroplast RNA maturation and degradation are regulated by nucleus-encoded factors that interact with sequences and structures within the RNA. Although several transcript-specific factors have been identified, those involved globally in RNA metabolism, apart from ribonucleases, have mostly remained elusive. Three pleiotropic nuclear mutations, mcd3, mcd4, and mcd5, appear to affect this global RNA metabolism, since they impact 5' end and 3' end maturation of two or more chloroplast transcripts in Chlamydomonas reinhardtii. These mutants were initially isolated as photoautotrophic suppressors of the 5' UTR mutations LS2 and LS6, which destabilized petD transcripts, but analysis of transcripts from 32 chloroplast genes showed that mcd3 and mcd4 displayed altered RNA transcript patterns for 17 genes, whereas three were altered in mcd5. The transcript patterns observed in mcd3, mcd4, and mcd5 are consistent with defects in endonucleolytic cleavage. Since the role of endonucleolytic cleavage in atpB 3' maturation has been well characterized, a series of reporter strains containing the ectopically-expressed atpB processing determinant, which consists of an inverted repeat and endonuclease cleavage site (ECS), were used to further evaluate the role of mcd4 in endonucleolytic cleavage as well as the sequences with which it might interact. These experiments suggested that mcd4 suppresses endonucleolytic cleavage involved in atpB 3' maturation, and that it is involved in endonucleolytic cleavages that initiate degradation. MCD4 likely interacts with the inverted repeat, the ECS CCand/or nucleotides 15-39 downstream of the ECS in facilitating this 3' maturation. To further characterize the role of MCD3, MCD4, and MCD5, a series of map-based cloning tools and methods were generated. Using these methods, MCD4 has been isolated to a 1,300 kb region and candidate gene analysis is underway. Taken together, these studies suggest that MCD3, MCD4, and MCD5 may be components of multiprotein complexes responsible for RNA maturation and degradation in Chlamydomonas chloroplasts that are recruited by gene-specific proteins such as MCD1, or RNA sequences and structures such as those found for atpB.