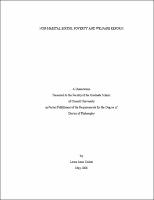 The central question this paper addresses is what effect will the provisions to reduce non-marital births in the Personal Responsibility and Work Opportunity Reconciliation Act of 1996 have on non-marital birth rates? Data from state waivers prior to the 1996 legislation is used to capture the policy environment in which a non-marital birth occurred in several states between 1992 and 1996; and to assess variation(s) in fertility behavior among those states. Creation of policy variables based on state waiver data allowed for further estimates of the impact (in selected states) of the specific policy provisions in the PRWORA aimed at reducing out of wedlock childbearing, and subsequent welfare receipt. A review and summary of research regarding the strength of association between non-marital child bearing and welfare receipt is provided and includes both a brief review of general literature about non-marital births and a more focused review of literature specific to the antecedents of non-marital births. The empirical analysis in this work utilizes data from the Urban Institute's National Survey of American Families (conducted in 1997 and 1999 after the Federal legislation was implemented) to examine two questions: whether or not the policy provisions and program efforts from the PRWORA accounted for the differences in determinants of non-marital births for teenage women and women over the age of twenty; and whether or not emphasis should have been placed on reducing teen pregnancy as a means to reducing welfare receipt and poverty in the 1996 PRWORA. Regression analysis estimated the impact of demographic variables on non-marital births in addition to the effect of specific welfare policies in selected states, and shows that the determinants of a non-marital birth differ by age of the mother, and the focus on reducing teen pregnancy is warranted despite the fact that adolescent women account for only 30% of non-marital births. Three areas in the legislation that require further analysis are identified and recommendations for addressing these shortcomings in the legislation are also offered to increase self-sufficiency of poor families in the context of legislative reauthorization, and future reform efforts.