An Examination of the Climatology and Environmental Characteristics of Flash Flooding for the Binghamton, New York County Warning Area 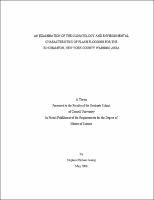 This study uses the publication Storm Data to compile a climatology of flash floods reported in the Binghamton, NY (BGM) County Warning Area (CWA) of the National Weather Service (NWS). This work reveals diurnal and seasonal trends in flash flood frequency across the CWA. Also evident is a spatial disparity in the number of flash flood reports in different portions of the CWA. In some cases, adjacent counties with similar topography reported a dissimilar number of flash floods. Because those counties reporting a strikingly smaller number of floods tended to be less populous than the neighboring counties reporting a larger number of events, a reporting bias may be to blame. Possible reporting biases aside, regional differences in the number flash flood reports across the CWA suggest that some areas are more prone to flash flooding than others. The more significant component of the project is to analyze the environmental characteristics of flash flood events in the BGM CWA in order to refine flash flood forecasting procedures. BGM's flash flood forecasting checklist prior to this study was based on parameters and thresholds found to be significant at nearby NWS offices, rather than site-specific for BGM. Additionally, the study seeks to identify any differences between flash flood and non-flooding heavy precipitation events so as to reduce the false alarm rate. Quantitative (discriminant analysis) and qualitative (composite map) analysis has been performed to discover parameters and combinations of parameters that differ between flood and non-flood events. The datasets are comprised of warm-season, non-tropical, meteorologically-induced flash floods, heavy precipitation events, and days in which flash flood watches were issued but flash flooding did not occur. That is, events such as dam breaks, ice jam floods, and snow melt events are excluded from the study. Events resulting from tropical systems are excluded, as the concern is primarily to identify those conditions associated with convective warm-season events. Additionally, a data set comprised of a random year assigned to the calendar date of each flash flood event is included to represent a climatology based on the annual distribution of floods. The results indicate that flash floods and non-floods differ most significantly in antecedent precipitation and antecedent soil moisture. Flash floods appear more likely to occur during periods of above-normal precipitation than non-floods. Wind direction at 850 mb and storm motion direction also show differences between flood and non-flood events. In particular, an easterly to southeasterly 850-mb wind or storm motion is almost always associated with flash flooding. Lastly, some parameters that had been included on the Binghamton checklist were found to be unreliable. For these parameters, the threshold values on the checklist were infrequently exceeded during flash floods, or these thresholds were more likely to generate false alarms of non-events than to warn of a flash flood.