An Analysis of the Events that Sustained the Crisis in Indonesia 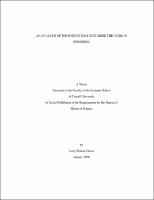 This research aims to uncover the forces that led to the intense nature of the 1997 financial crisis in Indonesia. While the crisis struck many countries in Asia, Indonesia was particularly hard hit. By examining the how the Jakarta Stock Exchange and the Indonesian Rupiah reacted to news events during the crisis, this research seeks to identify which kind of news events where most responsible for Indonesia?s volatility during the crisis. Where market players taking cues from the IMF and external credit rating agencies during the crisis or were they responding to events inside of Indonesia? The core data for this research are daily rupiah-U.S. dollar exchange rates and Jakarta Stock Market index quotes from July 1997 until October 1999. To analyze the variation in the data, news variables based on the Dow Jones News Service and other news outlets are used. Three main methods are used to analyze the interaction between markets and news. First I identify a set of key events using headlines from the New York Times. For each event I analyze the movements of markets during that period. Next rather than start with top news stories, the top 50 market movements for both the rupiah and Jakarta Stock Exchange are identified. The news events behind these movements are analyzed to determine which types of news (political, policy-related, international, civil unrest, etc.) drove the markets during this tumultuous period. Lastly indicator variables representing the various types of news are regressed separately on the daily quotes for the rupiah and the stock exchange. This gives a more exact measure of the impact of each type of news category. Testing for changes in the regression coefficients over time allows me to identify the most intense part of the crisis. A consistent picture of the crisis emerges from these three methodologies. First we see that the rupiah is more volatile than the Jakarta Stock Exchange index. The currency responds vigorously to both good and bad news while the stock market is less affected by bad news and consistently buoyed by good news. While the stock market may have lost considerable value because of the declining exchange rate, that aside, the market seemed to do relatively well considering the severity of the crisis. The importance of domestic news events also stands out. Although the announcements of international agencies like the IMF and World Bank were an important part of the crisis, the three key sources of domestic news have larger impacts: politics, policy, and civil unrest. This research shows that many of the events that sustained the crisis where not external to Indonesia. This research is able to give quantitative credence to the popular idea that Indonesia?s crisis transformed over time from a financial/economic crisis to a political/social crisis.