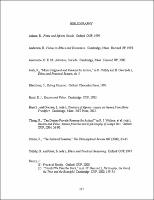 The aim of this project is to make sense of the relationship between practical reasons and self-conceptions (i.e. descriptions that an agent believes to be true of herself or is working to make true of herself). To achieve this aim, I have organized this project around three goals: (1) to offer a precise statement of the relationship between self-conceptions and practical reasons, (2) to describe the nature of this relationship, and (3) to examine its implications. I begin by surveying attempts by Christine Korsgaard and Harry Frankfurt to describe this relationship. After critiquing their views and presenting an account of normative reasons that ties them to desire-independent values rather than desires, I argue for the following conclusions. First, this relationship is one of mutual implication. According to this view, that one has certain normative reasons for action makes it appropriate for one to hold certain self-conceptions, and conversely, that one holds a self-conception of a certain sort (namely one that is true or characteristically associated with activities that promote objective values) entails that one has certain normative reasons for acting. The upshot is that every time an agent acts for a normative reason, we can say something interesting about the relationship between this reason and her self-conceptions (since either the reason will be grounded in an antecedent self-conception, or the reason will have important implications for the appropriateness of holding certain self-conceptions). Second, our intuitions that there is an important relationship are explained by the fact that there is a conceptual connection between practical reasons and categories of possible respondents to them, whereby all practical reasons must be understood as addressed to agents falling under certain descriptions. This claim is itself implied by the view that reasons are essentially functions relating agents under certain descriptions to the world of possible actions. Third, this conceptual necessity has a number of interesting implications. For example, attending to the connection between its terms opens new avenues for (a) evaluating proposed actions, (b) streamlining the deliberative process, (c) justifying the practice of grounding moral claims in appeals to self-conceptions, and (d) realizing important values.