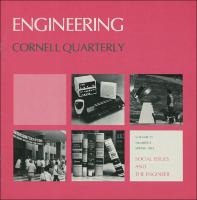 IN THIS ISSUE: Environmental Law in the Eighties /2 (Neil Orloff, a Cornell environmental engineering professor who is also a lawyer, calls for a restructuring of the massive body of environmental law during the coming period of reassessment.) ... Technology Assessment: An Added Responsibility for Engineers /7 (An activity that has developed in response to public concern over possible harmful effects of technology is discussed by Alfred M. Lee and Arnim H. Meyburg of Cornell's Program on Science, Technology and Society (STS).) ... Commentary: On Professionalism and Specialization in Engineering Education /16 (From STS comes this article by Stuart M. Brown, associate director of the program and professor of philosophy, and Walter R. Lynn, program director and professor of civil and environmental engineering.) ... Report from China. /. Notes on the Visit of a Cornell Delegation /22 (Engineering members of the ten-person delegation that made arrangements for personnel exchanges between Cornell and institutions in the People's Republic of China are interviewed by the Quarterly editor. The three from engineering are Thomas E. Everhart, Walter H. Ku, and Frank H. T. Rhodes. ... Report from China. II. Excerpts from a Delegate's Notebook /28 (Alain Seznec, dean of the College of Arts and Sciences, shares some of his observations during the Cornell delegation's visit.) ... A Sundial for the Quad /35 (An "engineering statement" designed by Dale R. Corson, president emeritus of the University, has become the focal point in the Joseph N. Pew, Jr. Engineering Quadrangle. Design features of the accurate timepiece are described in an interview article by the associate editor of the Quarterly.) ... Faculty Publications /44 ... Letters /48